Ibaraki's Akutai Festival is something out of the ordinary. What did you expect? This is a Curse Festival, you idiot! 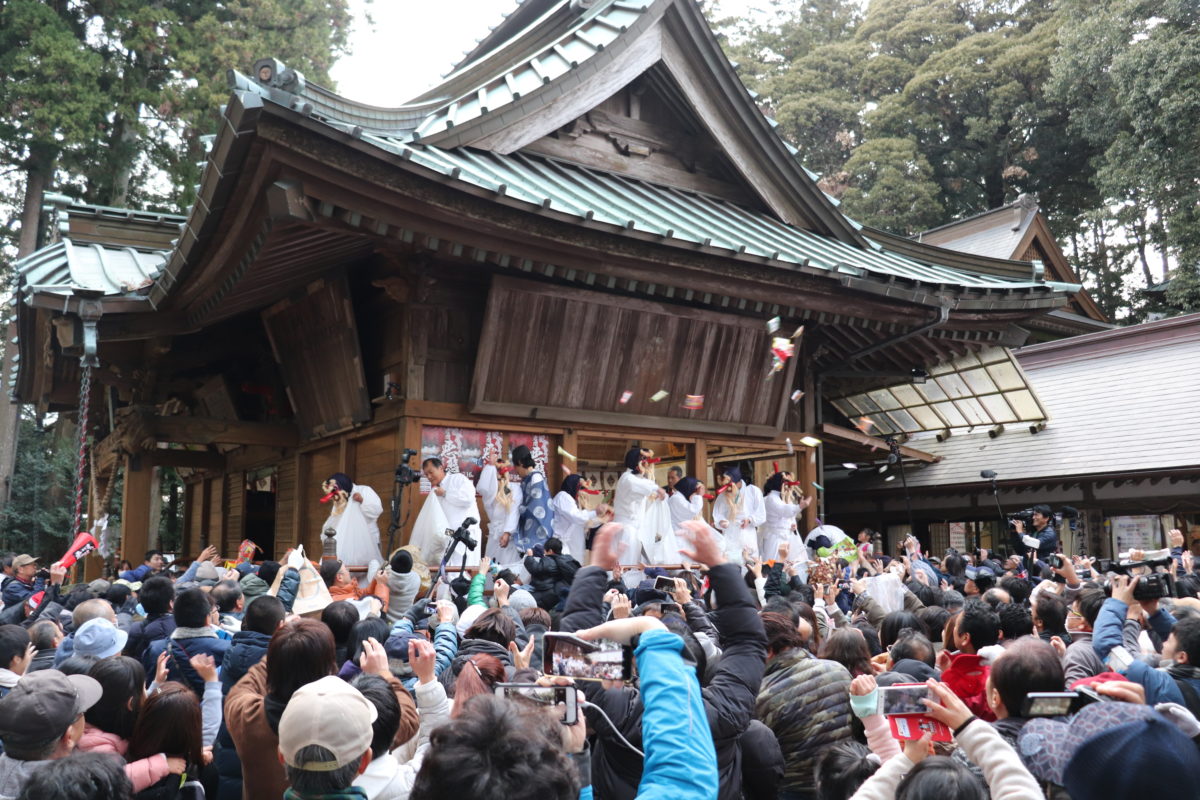 Japan is known for its huge number of festivals – according to some estimates there are more than 200,000 in total – so it should come as no surprise that you can find a wide array of themes used as a pretext for celebration throughout the country – including some preeetty weird ones. I’ve visited various festivals in Japan, but Ibaraki Prefecture’s Akutai Festival takes the… mochi rice cake!? Akutai Matsuri – the “Curse Festival” or “Festival of Verbal Abuse” – has been widely recognized by the Japanese themselves as one of Japan’s 3 strangest festivals ( 日本３大奇祭). You’ll soon understand why.

I’m Anette, an Omatsuri Japan festival reporter! Here getting ready to curse at random strangers with an Akutai megaphone…

Ibaraki lies to the east of Tokyo and is a prefecture known as home to Japan’s tallest Buddha statue (the Ushiku Daibutsu – 牛久大仏) and the wonderland-like Hitachi Seaside Park (国営ひたち海浜公園) where a blue sea of Nemophilia flowers stretch out as far as you can see. One might think that people living in such a peaceful place generally would be all well behaved and polite. But the atmosphere in this drowsy prefecture is turned upside down once a year at the day of the annual Akutai Festival celebration – a day where you can curse as much as you want at whomever you want. And with a history that is said to date back to the middle of the Edo period (around 1700CE), it is clear that the locals still love to curse at each other when they get the chance.

But why all the cursing? Anyone familiar with Japanese culture already knows how the concepts “honne” (本音) and “tatemae” (建前) play an important role in the society; one is not supposed to speak one’s mind if it risks damaging the peaceful atmosphere, known as “wa” (和). While this is common throughout Japan the local rulers in Ibaraki Prefecture’s Kasama（笠間）city were afraid that people’s dissatisfaction would grow into tumultuous riots if they couldn’t get the commoners to speak their minds. Thus the Akutai Festival was established as a festivity dedicated to the complaints of the people. On this day citizens could speak their mind, even criticizing the government, without facing repercussions. That is supposedly how the celebration of this annual festival started.

The local rulers … were afraid that people’s dissatisfaction would grow into tumultuous riots if they couldn’t get the commoners to speak their minds. Thus the Akutai Festival was established as a festivity dedicated to the complaints of the people.

The Akutai Festival commence at the base of Kasama’s Asago mountain (愛宕山), and the first mission is to follow 13 Tengu (天狗 / Japanese mythical creatures) on their way up to the Asago Shrine (愛宕神社) at the mountain’s summit. This is a festival that encourages active participation, which means that while you could always drive all the way to the end of the trail, you’re welcome to take part in the whole festival by walking in the path of the Tengu. The Tengu themselves are represented by Shinto priests dressed in white, and no matter what you yell at them during the long walk they will keep on walking with their mouths shut. But while you can say whatever is on your heart without having to fear retaliation, the festival is still not completely risk-free. Until 1941 the festival was conducted exclusively by and for men, and traditionally it took place at night. However, walking around in pitch black surroundings up and down steep slopes led to, no surprise, various accidents and participants getting hurt, and eventually a forced end to the festival in 1965. But apparently people weren’t happy about losing out on the opportunity to let off some steam, so after a long break the festival was back on the agenda again from the beginning of the new millennium, only now it had to be conducted during day time.

If you join the group that walk with the Tengu from the bottom of the mountain it takes about an hour to get to the shrine. While the 13 Tengu walk in silence the locals and other visitors are chanting swear words to each other as they proceed up the mountain trail.

This is even a chance for married couples to get rid of their frustrations. “You drink too much, you idiot”. “If you want me to drink less then perhaps you should cook me better food once in a while, you idiot!”. A lot of it is just basic cursing, but some of the participants who have a quicker tongue come with various comments as they observe their environment. You might be lucky and witness some curse battles along the way! I have been told that the rules of the festival is simple – you can say whatever you want as long as you don’t mention any person or company names in your rants.

As you make your way up the mountain side the Tengu stops at small wayside shrines, hokura (祠), where they conduct a special ritual and lay down an offering; a mochi cake neatly placed on a mat made of straw. Here you get to witness how the locals encircle the hokura and as soon as the Tengu places the offering on the ground engage in a fierce battle as they race to snatch the blessed items.

Outsiders are of course welcome to fight for the lucky items too, but any damage that happens to you is on your own responsibility, and you can even end up getting hit by the Tengu in the process. Bleeding noses is not an uncommon sight – But who cares about potential injuries when a holy mochi is at stake?!

Bleeding noses is not an uncommon sight – But who cares about potential injuries when a holy mochi is at stake?!

Finally you’ll arrive at the head shrine where participants gather in front of the main hall and wait for the Tengu to arrive, finally showing their “true” faces. You have to wait for quite a while for this to happen, as the Tengu are taking their sweet time in the shrine first – making it the perfect chance for participants to again yell out their frustration.

“Common you idiots, don’t keep us waiting! Bakayaro!!”
And you won’t get disappointed – Just when you thought things wouldn’t get weirder the festival reaches its climax as the Tengu make their reappearance with demon masks on and start throwing mochi rice cakes and candy at their audience. Yes, you read it correctly. The stuff is all is edible, and I suggest you bring an extra bag so that you can bring the mochi with you home and cook it for dinner. The festival comes to a natural end as the Tengu run out of candies and again are forced to retreat from the world of men. So long, and thanks for all the.. Mochi?

Just when you thought things couldn’t get any weirder the festival reaches its climax as the Tengu make their reappearance with demon masks on and start throwing mochi rice cakes and candy at their audience.

How much you’re able to enjoy this festival can depend a bit on your level of Japanese and how much you are able to take part in the vocal exchanges yourself. If you’re not that used to cursing in Japanese my advise would be to memorize a couple of phrases in advance that you can use. Taking part in the swearing makes the whole thing a lot more fun, and if you’re good at it you can make the locals laugh too. The locals thought it was particularly amusing to make me use local swear words, like the word for “idiot”; “gojappe” (ごじゃっぺ) and “deresuke” (でれすけ).

While it might not sound fun to take part in a festival where everyone are screaming at each other it was indeed a very humorous festival! I mean.. Lucky items made of straw, and Tengu throwing rice cakes and candies… Now, if you don’t think that is fun then you don’t have a sense of humor, you idiot!